California has spent more than $10 billion on water projects that are contributing to the death of San Francisco Bay and the Sacramento Delta -- a special report
11.16.10 - 7:06 pm | sfbg |

While Californians were held captive waiting for Gov. Arnold Schwarzenegger and the Legislature to agree on spending cuts and adopt a budget, state officials were throwing hundreds of millions of dollars down the drain and compounding California's water crisis.

Water officials have wasted more than $10 billion and 35 years in extended delays in their failed attempt to carry out their legal mandates to protect the waters of the state and restore the San Francisco Bay-Delta Estuary. The result: water quality in the estuary is rapidly declining; fisheries are in crisis; and the proposed solution, an $11 billion bond act set for the ballot in 2012, will only make things worse.

The primary source of the water-quality crisis is a toxic mix of salt and chemicals discharged from lands irrigated by subsidized water delivered by the federal Central Valley Project to contractors farming on the arid west side of the San Joaquin Valley.

The salt comes from several sources. Irrigation water — particularly from the delta, where the water is somewhat brackish — contains salt. There also is salt and traces of much more toxic selenium in the soil. Industrial fertilizers add more dangerous chemicals to the mix. And since crops grown in the Central Valley don't absorb much salt and the constant flushing with irrigation water leaches the selenium out of the soil, a nasty stew starts to build up.

This U.S. Geological Survey map shows a plan by federal and state regulators to divert toxic water more directly into the Sacramento Delta. All these diversion plans ignore the fact that poorly drained land isn't suitable for farming.

If the irrigation water isn't drained off, the salt buildup in the groundwater renders the land unusable to farming. In essence, farmers have been dumping the runoff water — laden with salt and selenium, along with mercury and boron — into the San Joaquin River, which carries it back into the delta and the bay.

All this is being done as the government declares its intent to save the San Francisco Bay-Delta Estuary. Read more.. http://www.sfbg.com/2010/11/16/delta-death
http://www.sfbayguardian.com/2010/11/16/down-farm
Down on the farm
How state water policy wiped out farming and fishing on one delta island
Share 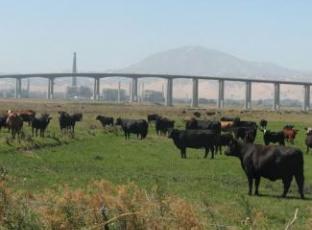 On Sherman Island, cow pastures have replaced productive agricultural lands
PHOTO BY REBECCA BOWE
rebeccab@sfbg.com
Sherman Island may barely register for motorists traveling over the Antioch Bridge and through the delta on Highway 160. Almost wholly owned by the Department of Water Resources, the roughly 10,000-acre patch of Sacramento-San Joaquin Delta flatland is barely developed, and probably home to more cows than people. It lies at the confluence of the Sacramento and San Joaquin rivers, where freshwater mixes with the salty seawater of the San Francisco Bay.
What isn't obvious at first glance is that Sherman Island was once host to highly productive agriculture — but as delta water quality diminished, farmers saw their crop yields plummet. Larry Del Chiaro, who formerly headed the Sherman Island Landowners Association, used to grow asparagus, wheat, barley, safflower, milo, hay, and other crops on the island. But today, like nearly all the others who previously raised crops there, he no longer has property there and has moved on. His story illustrates how California water policies have benefited one group while affecting the livelihoods of the people who live in the state's central water hub, the delta.
"I was a third-generation farmer on the island," Del Chiaro told the Guardian on a hot August day in the city of Pittsburg. "My grandfather started it. My father, his brothers, my cousins were all on the island farming." Del Chiaro majored in soil science in the 1970s and was interested in increasing crop yields, so he set up test plots and was closely monitoring their progress.
With the help of consultant Patrick Porgans and a San Francisco attorney, Del Chiaro and the 26 other Sherman Island landowners sued DWR for damages. In 1991, the state settled for $3.6 million, and the farmers were paid for not drawing water out of the delta. Soon after, DWR bought up the island. Once the water agency took control, it eliminated the need for DWR to satisfy contractual obligations to provide freshwater to the Sherman Island farmers. The farmers had cleared out, and the agency's problem was solved.


How California exports water
Did the great California drought of 2009 really happen?
11.16.10 - 6:56 pm | sfbg |
(0)
Share1
Related:
Delta death
Down on the farm
By Patrick Porgans
In 2009, the last year of the so-called great California drought, a strange thing happened: Sacramento Valley growers produced a near record amount of rice, and down south, the Metropolitan Water District of Southern California (Met), the largest urban water supplier in the nation, experienced record-breaking water sales. All this despite repeated mainstream media accounts in 2009 of an economy-wrecking dust bowl water shortage.
According to the U.S. Department of Agriculture, the California rice harvest in 2009 was up 9 percent from the previous year and approached the record crop of 2004.
Rice consumes a great deal of water for its dollar value and produces little net income. According to a report by the University of California, Davis, the minimum amount of water required to grow a crop of rice is about 42 inches per acre. Unavoidable losses can add to this amount — so that the amount of water consumed (or evaporated) can be as much as 100 inches per acre, depending on the soil. That appears to be enough water to drown the tallest person on earth.
The California Rice Commission, a trade group representing 2,500 rice farmers, estimates that rice uses 2.2 million acre-feet of irrigation water yearly, about 2.6 percent of the state's total water supply. According to records obtained from Met, that's equal to the annual average water it supplied to all of its 19 million customers. Read more http://www.sfbg.com/2010/11/16/how-california-exports-water
Posted by Patrick Porgans at 12:49 PM

Posted by: Aqua Blog Maven on November 17, 2010 at 8:11 am From the Environmental Defense Fund, this testimony by Cynthia Koehler before
Assembly Committee on Water, Parks and Wildlife on November 16, 2010:


“Chairman Huffman and Members of the Committee, on behalf of the Environmental Defense Fund (EDF) and our thousands of California members, thank you for this opportunity to speak with you today about the Bay Delta Conservation Plan (BDCP) and the outlook for the future. As you know, EDF has been a member of the BDCP Steering Committee, and my colleague Ann Hayden has been an active participant in the BDCP process, for the last five years. Attached to this testimony is a recent Opinion Editorial piece that Ms. Hayden and I wrote for the San Francisco Chronicle that very briefly outlines EDF’s view about BDCP and the direction it can take most productively going forward.

As indicated in the Opinion Editorial, EDF remains firmly committed to the BDCP process and believes that, notwithstanding important unresolved issues, it is only through this type of open, public and thorough planning effort that California will successfully restore the most important estuary on the west coast while also providing steady and sustainable supplies of water to our farms and cities. We are encouraged that even in the face of disagreements among stakeholders about how best to proceed, there is nevertheless a strong consensus that ecosystem restoration of the San Francisco Bay-Delta is a vital priority for California on par with providing reliable water supply. … “

Continue reading this testimony by clicking here.
Posted by Patrick Porgans at 6:59 PM

Posted by: Aqua Blog Maven on November 17, 2010 at 8:22 am From the California Natural Resources Agency, this press release:


“Sacramento – Natural Resources Secretary Lester Snow today announced that two major reports on the Bay Delta Conservation Plan (BDCP) will be released in the next few weeks.
The BDCP is a comprehensive conservation plan to protect species/habitat protection and improve the reliability of water supplies in the Sacramento-San Joaquin Delta.

“While the Delta has become the most politically contentious water management issue in California,” Snow said, “our progress in developing the Bay Delta Conservation Plan speaks to a growing consensus that we must achieve a Delta ecosystem that is more resilient and improve the state’s water supply reliability.”

Testifying before the Assembly Water, Parks and Wildlife Committee, Snow said that the BDCP Steering Committee plans to finalize its working draft Plan at its meeting on Thursday, November 18. The draft is a product of a collaborative process that has included the California Department of Water Resources, the U.S. Bureau of Reclamation, federal and state fisheries agencies, water contractors, environmental organizations and other stakeholders. It will reflect substantial progress towards a completed Bay Delta Conservation Plan, and identify remaining elements where scientific work and other analysis is needed. The 1,500 page draft report will be available to the public on Monday, November 21.

A separate status report and issues summary on the BDCP will be released the week of December 6, 2010. This document will include the State of California’s assessment of the issues, but will reflect the work of both state and federal agencies, water users, and the environmental community. It will also identify issues that require further resolution, including additional scientific analysis to improve upon water operations for Delta fisheries, ecological metrics to measure progress, and ongoing development of an adaptive management plan
Documents will be available at www.resources.ca.gov and www.baydeltaconservationplan.com.”

Posted by Patrick Porgans at 6:52 PM