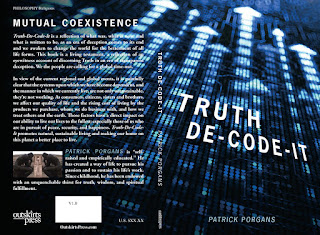 MUTUAL COEXISTENCE: Truth De-Code-It is a reflection upon an Era of Deception ending as we awaken out-of-necessity, from the Goldman Sachs' Wall Street worldwide-banking cabal, into a Golden Age-of-Global Change.
The handwriting is on the wall, natural and human-induced conditions necessitate a change; as the systems upon which we have become dependent, and the manner in which we live, are not only unsustainable, they're not working.


Change is a constant, and when all else fails it's back to Mother Nature.
Noted Greek Philosopher Plato reportedly said, “The true creator is necessity, who is the mother of all invention”. Einstein, paraphrasing Plato, said, “Necessity is the mother of all invention”. The level of deception and impending-global crises (real or orchestrated) invoke the creative-necessity to implement a naturally-sustainable way out of this human-induced mess commonly referred to as Manifest Destiny.


Truth-De-Code-It is a reflection of what was, is now, and what is written to be, as an era of deception comes to an end, we awaken to become empower to change the world for the betterment of all life forms as we journey within a millennium of new beginnings.
Eschatology prophecy bears witness to the presence of Parousia; at last, the Second Coming is at hand, all things are to be reconciled accordingly.


Evil is on the way to burning it's’ greedy-self out, raising fears, rising doubts, “We the People” are calling for a global turn-about that will empower each of us, one at a time, to change our ways and the world around. There is no signing up, sending donations or endless meetings as you alone are empowered to change, and as an inhabitant of this earth a decision to live in accordance with Nature’s laws is your contribution. Please share this information with a friend. Thank you.
FYI: Order book(s) www.amazon.com/Truth_De-Code-It,    http://www.pr.com/press-release/469265 or http://gudelnews.com/index.php?option=com_content&task=view&id=1424405 Wholesale books – 10 or more $5.00 each…Contact Bridgette at Outskirts Press 1-888-672-6657 Ext. 719
Send comments to Patrick Porgans at pp@planetarysolutionaries.org

Posted by Patrick Porgans at 7:30 PM

by Patrick Porgans, Planetary Solutionaries (Initially released 5 Feb. 2013)
Chris Malan, representing Living Rivers, is dead set on keeping fish alive in Kimball Creek, a tributary on the upper Napa River. Public records indicate that the City of Calistoga would be at fault for dead fish if it fails to release adequate flows from Kimball Dam and Reservoir, which are required to protect downstream fishery.
In Malan’s latest salvo “City must act now to protect fish” she makes a compelling argument, by backing up her stance on “water for fish now", pointing out the fact “it’s the law,” placing the city on a major “fault-line” and in the line-of-sight of the State Water Resources Control Board.

Formal complaints have been filed against the city for failure to comply with the terms and conditions of a State Water Board issued permit associated with the right and use of water stored behind Kimball Dam.

Added pressure on the city’s fault-line is mounting due to the fact it is under a court order, Reynolds v. Calistoga, requiring water for fish releases from the dam, as prescribed in California Fish & Game Code Section 5937. This fish protection law was enacted in 1937; even fishery agencies acknowledge time for the fish is running out.

It’s a law that has never been enforced in a way consistent with the plainly stated language and requirement to maintain below-dam fish in good condition, according to a recent UC Davis law review article.

Section 5937 is being put to the dam test. Reynolds’ attorney, Bill McKinnon, appears to have his mind set on ensuring city leaders, so to speak, get-it-right up at the dam. City officials claim that they are cooperating with the court order. Critics claim officials are stalling.

Malan’s move to have the matter before the State Water Board is the next-dam step to get water for fish before it’s too late. As is the case with migrating salmonid species there are many hurdles to leap; reportedly steelhead have been known to leap up and over 17 feet.

As fate would have it, the State Water Board has its own set of “circumstantial setbacks,” such as the protracted implementation and subsequent litigation surrounding a Board adopted Policy for Maintaining Instream Flows in Northern California Streams, commonly referred to as the North Coast Instream Flow Policy. It contains Instream flow and other requirements to “protect fish,” which, believe it or not, was about a decade in-the-making; adopted in 2010. In 2012 the State Water Board retracted (vacated) its Instream Flow Policy.

In addition, Living Rivers has the State Water Board adopted Wine Country “Frost Protection regulations” in a legal freeze, asserting deficiencies contained in the environmental impact report (EIR). Living Rivers expressed concerns regarding such issues as groundwater availability and use of water by vintners during a freeze and its detrimental effects on fish; causing streams to dry up and fish to die.

According to the provisions contained within the federal Endangered Species Act (ESA), creating, aiding or abetting stream dewatering which results in killing or loss of listed steelhead and other salmonid species, constitutes a “Take” under federal law.

Malan’s concerns of fish kill and “Take” resulting from frost protection and stream dewatering in Wine Country are valid and supported by the record.

Several years ago, frost-protection-fish kills were documented in Wine Country’s Russian River watershed prompting National Oceanic & Atmospherics Administration's Office of Law Enforcement (OLE) agents to take an ESA action against a few “mom and pop” vintners. As it turned out the long-awaited OLE enforcement actions, resulting in “documented” frost-related “Take” of listed salmonid species “was all bark and no bite”.

Another added factor to support Malan’s position resulted from a 1976 Napa case, People ex rel, State Water Resources Control Board v. Forni et al, the State’s Superior Court issued a permanent injunction against certain vintners in the Napa Valley from drawing water directly from the Napa River to their vineyards for frost protection.

The court ruled water diversion for frost protection constituted an unreasonable method of diversion within the meaning of Article 14, Section 3, of the California Constitution and Section 100 of the Water Code. That case was prompted by a State Water Board action against the vintners in 1973.

To sum it up, the State Water Board has the ultimate responsibility to compel compliance on water rights and related uses, including water for fish.

In this case, its members are going to have to step up to the plate and sink their regulatory teeth into the water for fish issue. Essentially, adding all of the factors into the equation it appears to be show-time for the State Water Board, fish or cut bait.

Whatever the case, at this point, State Water Board members are going to be damned if they do or don’t. Knowing full well water for fish will generate some sour grapes in Wine Country, while Malan and others may find comfort knowing fish have water to propagate. The fish have, if you will, a swimming chance.

From out in Wine Country it is looking like the State Water Board can count on a standing room only crowd hooked on making “water for fish” a long-dam overdue reality.

For more information send email to pp@planetarysolutionaries.org
Posted by Patrick Porgans at 9:39 PM