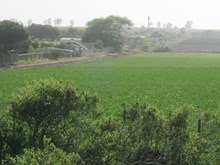 The EPA and lawmakers say California needs to do more to provide communities with safe drinking water.


Map of Proposed Clean Drinking Water Projects
The Environmental Protection Agency says California is violating the Safe Drinking Water Act.
The EPA says the state’s Department of Public Health has failed to spend nearly a half billion dollars in federal money to provide safe drinking water.
It’s estimated the state will have to spend 40 billion dollars over the next two decades to fix the problem.

Some lawmakers are outraged by what they see as a bureaucratic nightmare within the Department of Public Health.

SPRINGFIELD STRUGGLES TO PAY
Marta Saldibar, her husband and son have lived in the tiny community of Springfield in the Salinas Valley for six years.

In that time, she’s paid her monthly water bill. Then she’s paid close to $100 a month for bottled water.

Her well water, like that of her neighbors, has a nitrate contamination level six times higher than what is safe to drink.

“I just think it’s unfair that because we live in a poor neighborhood we have to wait all this time to get the water that we should have,” says Saldibar. Read more
Posted by Patrick Porgans at 12:10 PM

By Patrick McGreevy
SACRAMENTO -- Officials at the FBI would not say why they raided the offices of Sen. Ron Calderon (D-Montebello) and the Latino Legislative Caucus at the Capitol on Tuesday, but prior to the raid they interviewed at least one official in Los Angeles about contracts at an agency with links to Calderon and one of his brothers.


A company official who bid on work at the Central Basin Municipal Water District in Los Angeles County said Tuesday that he had been interviewed twice by FBI agents since March about the agency's contracting practices. Central Basin has paid up to $140,000 a year on a consultant contract with Tom Calderon, the senator’s brother and a former state lawmaker himself.
In addition, Ron Calderon has authored legislation on behalf of Central Basin in the past.
IN DEPTH: Calderon targeted by FBI
Michael J. Franchek, a vice president at EcoGreen Services, said Tuesday that the FBI agents wanted to hear about his complaints and allegations that favoritism has been involved in contract awards, including the one that went to Tom Calderon.
Franchek said he talked to the agents about a federal stimulus grant to Central Basin. The water agency officials held competitive bidding and chose a firm called Water2Save to work on the project.
The Los Angeles Times has reported that Tom Calderon also has a consulting contract with Water2Save.
“Our conversation went to Tom Calderon’s relationship with Central Basin,” Franchek said, adding that he voiced concern that Sen. Ron Calderon’s influential status in the Legislature might have affected contracting decisions.
ALSO:
Federal probe rocks California Capitol
Latino Caucus office also raided by FBI

Posted by Patrick Porgans at 1:12 PM