Had erosion upstream continued it could have compromised the Dam, Maurice  Roos, Hydrologist, California Department of Water Resources since 1957, CBS interview

While water officials’ interim attempts to apply band aid fixes, news reporters failed from the onset to ask the quintessential question, where was the Department of Water Resources “Emergency Action Plan” for the Oroville Dam facilities. The Plan is required by the Federal Energy Regulatory Commission (FERC) for the operation of the Oroville Facilities, which includes the Flood Control Outlet and Emergency Spillway.


ontact was made with FERC personnel, in Washington, D.C., to obtain a copy of the latest Emergency Action Plan filed by the Department for the State Water Project's Oroville facilities.


FERC's Office of External Affairs stated it is a Freedom of Information Act (FOIA) request, which could take 30 to 60 days or more to receive a response. Department officials already have a copy of this Plan.
Furthermore, FERC's attorneys would review the nature of the request, and discuss the release of the Emergency Action Plan with the Department to get its' input before considering release of the Plan. However, even if the Plan is released, the requester would have to sign a Non-Disclosure form stating the FOIA requested Plan is not to be shared with anyone, and there may be a fee.
he FOIA Reform Act of 1986 provides that documents are to be furnished without charge or a reduction in established fees if disclosure is in the public interest because it is likely to contribute to public understanding of the operations or activities of the Government and is not primarily in the commercial interest of the requester.
Copies of the State required Department's annual dam inspections it conducts at the Oroville facilities, including the dam, gated flood control outlet, and the emergency spillway, were obtained by Planetary Solutionaries. The inspection report conducted in 2016 depicts cracks and bulges in the gated flood control outlet structure and movement of boulders and vegetation below the Emergency Spillway. (See photographs below.) 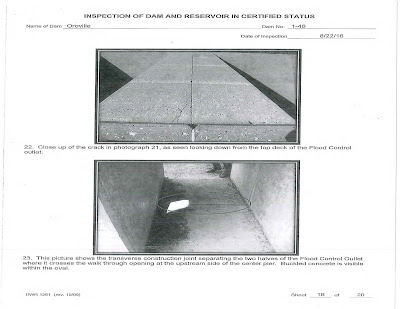 Department officials were reluctant to release the State required annual dam inspections of the Oroville Facilities. It required a personal visit to the Department’s Headquarters and Division of Dam Safety, which are located in two different places in Sacramento. The Division of Dam Safety was advised that the author was in route to get the inspection documents. Upon arrival, Division personnel stated that even though they are responsible for conducting the inspections, the reports were not on file at that office; ironically the documents were in the possession of the Public Information Office, located at Department Headquarter!

Ten minutes later, upon arrival at the Headquarters, the author explained to Department personnel, he was not leaving until they provided the dam inspection reports; which minutes before closing, they provided.

It is important to note that the Department is responsible for the inspections of an estimated 1200 dams throughout the Golden State; what does that say about dam safety!

A number of other abnormalities occurred during this calamitous and near catastrophic event; officials’ statements no danger to public safety followed by an instantaneous evacuation mandate. This evacuation reportedly uprooted an estimated 200,000 people from several surrounding counties; government websites that provide vital reservoir operation data went down; sensors for monitoring flood data were no longer available via the web, and so on.

The author made the effort to provide local newspaper and T.V. stations of these findings, but they opted not to use the information. #

Additional information on the conditions leading up to the flood water releases and the manner in which they were made will be continued in the second part of this three part series.


About the Author: Patrick Porgans, Forensic Accountant, Government Regulatory Specialist and Solutionist with Porgans/Associates. Porgans is also the founder of www.planetarysolutionaries.org a not for profit organization.
Since 1985, Porgans initiated a Reservoir Monitoring Program during the rainy season to ensure dam operators are compliant with federal flood control rules and regulations. He conducted a Fact-Finding Reports of every major flood disaster that occurred on the Feather and Yuba Rivers since 1986.
He has completed 79 Fact-Finding Reports on water-and water-related issues in California and throughout the West. He provided the chapter on the State Water Project, which was in Marc Reisner's book, Cadillac Desert.   http://patrickporgansblog.blogspot.com/  https://www.linkedin.com/patrickporgans
Posted by Patrick Porgans at 6:00 PM